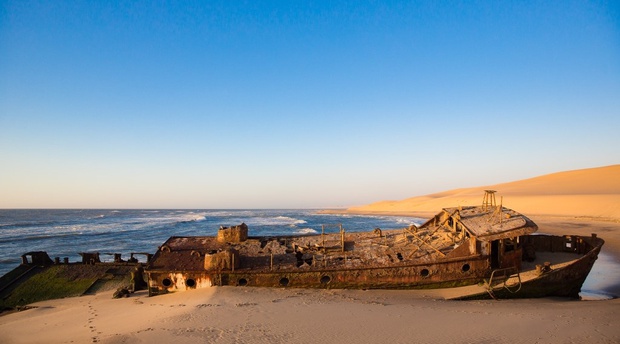 Experience a piece of Namibia's central rugged coastline exposed to the stormy South Atlantic Ocean claiming numerous ships over past centuries. Combine the scenic beauty and wildlife of the Kuiseb Delta and Sandwich Harbour, as we explore further South along the coastline to an area where the Namibian coast claimed another victim, the Shawnee, which ran aground in 1976. This excursion may also done in combination with the Sandwich Harbour Sailing Adventure offered by our sister company, Catamaran Charters.

We depart our office at the Walvis Bay Waterfront at 09h00. After a short break at the Walvis Bay Lagoon to see masses of flamingos, the drive initially takes us through our exclusive Concession area to the Kuiseb river delta, a dry riverbed where the odd springbok may still be seen. If weather and tides allow, we will drive right to the Sandwich Harbour Lagoon along the beach, one of Southern Africa’s richest and unique wetlands and one of five RAMSAR sites (Ramsar site no. 743) in Namibia. Sandwich Harbour boasts two distinct wetlands and associated mudflats. One is aquifer-fed and supports typical emergent vegetation, but is slowly disappearing due to natural causes. The second, under tidal influence, consists of mudflats and raised shingle bars. Wedged between the sea and the Namib Dunes, it is one of Namibia's most important coastal wetlands, supporting eight endangered species among the large numbers of wading birds. Several archaeological sites dating back 1,000 years exist within the site. Human activities have included fishing, guano collection, and hunting. If our vehicles cannot drive all along the beach to get to Sandwich Harbour because of high tide, you will get a chance to see the lagoon area from one of our many beautiful lookout spots and will have the time to walk and explore. We have lots of time to stop along the way for photography.

We proceed southwards on a route through the dunes and along the beach, stopping at various spots along the spectacular Sandwich Harbour lagoon. We pass historical Topnaar cultural sites and drive on narrow stretches of beach where the majestic dunes of the Namib desert roll into the sea.

We will arrive at the Shawnee ship wreck at around midday. Namibia’s coast’s rough seas, roaring winds and strong ocean currents are primarily responsible for a number of shipwrecks strewn along the Namibian coast. One of these is the Shawnee, a transport tug that ran aground in mysterious circumstances on 6th February 1976. Now wedged on a narrow stretch between the ocean and the dunes, it is home to a variety of seabirds and black-backed jackal.

We serve lunch on the spectacular beach at the wreck, consisting of a selection of fresh oysters, meat and fish platters with sparkling wine, beer and cooldrinks.

The route homewards will take us over some exhilarating dunes and you will experience some of the area’s typical fauna and flora. Animals which have developed ways to adapt to the desert include the black-backed jackal, fog-basking beetle, dancing spider (‘white lady of the Namib’), golden mole, shovel-snouted lizard, palmato gecko, springbok, oryx, brown hyena and ostrich. Endemic to the central Namib Desert, the !Nara plant has adapted well to the desert. Its tap root can reach more than 15m into the ground to reach water resources.

Passing a stretch through the Kuiseb Delta, we will be back at the Waterfront at around 17h00.

Fitness Level: This activity is safe for all age levels.

View
Learn to conquer the Dunes of the Namib

Learn to master the tallest dunes, so bring your 4x4 and become a proficient dune driver with us!